Squash is played in more than 185 countries, on nearly 50,000 courts, and the WSF now has 147 Squash playing National Associations in membership. It is the sole International Federation for the sport, as recognised by the International Olympic Committee (IOC), and maintains responsibility for the Rules of the Game, Court and Equipment Specifications, Refereeing and Coaching. The WSF maintains a World Calendar of events, organises and promotes World Championships for Men, Women, Junior Men, Junior Women and Masters age groups in both singles and doubles Squash; and leads its Member Nations in programmes for the development of the sport. Squash has been played for over 140 years, grown sensationally in the last forty and is now poised to become one of the largest and best loved of all sports. 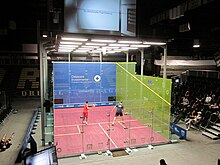 The squash court is a playing surface surrounded by four walls. The court surface contains a front line separating the front and back of the court and a half court line, separating the left and right hand sides of the back portion of the court, creating three ‘boxes’ – the front half, the back left quarter and the back right quarter. Both the back two boxes contain smaller service boxes. All of the floor-markings on a squash court are only relevant during serves.

There are four walls to a squash court. The front wall, on which three parallel lines are marked, has the largest playing surface, whilst the back wall, which typically contains the entrance to the court, has the smallest. The out line runs along the top of the front wall, descending along the side walls to the back wall. There are no other markings on the side or back walls. Shots struck above or on the out line, on any wall, are out. The bottom line of the front wall marks the top of the ‘tin’, a half metre-high metal area which if struck means that the ball is out. In this way the tin can be seen as analogous to the net in other racquet sports such tennis. The middle line of the front wall is the service line and is only relevant during serves.

Just before the match, the players spin a racket (usually up or down of logo) to decide who serves first. This player starts the first rally by electing to serve from either the left or right service box. For a legal serve, one of the server’s feet must be touching the service box, not touching any part of the service box lines, as the player strikes the ball. After being struck by the racket, the ball must strike the front wall above the service line and below the out line and land in the opposite quarter court. The receiving player can choose to volley a serve after it has hit the front wall. If the server wins the point, the two players switch sides for the following point.

After the serve, the players take turns hitting the ball against the front wall, above the tin and below the out line. The ball may strike the side or back walls at any time, as long as it hits below the out line. It must not hit the floor after hitting the racket and before hitting the front wall. A ball landing on either the out line or the line along the top of the tin is considered to be out. After the ball hits the front wall, it is allowed to bounce once on the floor (and any number of times against the side or back walls) before a player must return it. Players may move anywhere around the court but accidental or deliberate obstruction of the other player’s movements is forbidden. Players typically return to the center of the court after making a shot.

Squash scoring systems have evolved over time. The original scoring system is known as hand-out scoring. Under this system, if the server wins a rally, they receive a point, while if the returner wins the rally, only the service changes (i.e., the ball goes “hand-out”) and no point is given. The first player to reach 9 points wins the game. However, if the score reaches 8-8, the player who was first to reach 8 decides whether the game will be played to 9, as before (called “set one”), or to 10 (called “set two”). At one time this scoring system was preferred in Britain, and also among countries with traditional British ties, such as Australia, Canada, Pakistan, South Africa and India.

The current official scoring system for all levels of professional and amateur squash is called point-a-rally scoring (PARS). In PARS, the winner of a rally always receives a point, regardless of whether they were the server or returner. Games are played to 11, but in contrast to English scoring, players must win by two clear points. That is, if the score reaches 10-10, play continues until one player wins by two points. PARS to 11 is now used on the men’s professional tour, and the tin height has been lowered by two inches for the men’s professional tournaments (these changes have been made in a hope to shorten the length of the rallies and therefore the match). The women’s professional tour uses the original tin height, but started using the PARS to 11 scoring system as of July 2008.

Competition matches are usually played to “best-of-five” (i.e., the player to win the most out of five games).

Where can I play Squash in Ireland?

There are hundreds of Squash courts throughout Ireland and the players and teams of those clubs will be delighted to meet any player. You can view a map of the locations of the clubs here

As with all sports if you have any reason to doubt your health please consult your doctor before playing squash. If you have an injury, think before you play as you may aggravate the injury. Ensure that you stretch properly before playing, this is called the ‘warm up’ and also stretch after your game, the ‘cool down’. Approved eyeguards are strongly recommended. In tournaments held under the auspices of Irish Squash, it is compulsory for junior players to wear approved eyeguards.