Madeline Perry, the most successful female Irish squash player of all-time, will make her farewell WSA World Tour appearance at the Gillen Markets Irish Open later this month in Dublin. A full-time professional since 1999, 38-year-old Perry has enjoyed a distinguished career in the sport, winning 11 WSA Tour titles from 27 final appearances and celebrating a career-high world No.3 ranking in 2011. The Australian Open champion in 2010 in Canberra – where she upset both the second and third seeds en-route to the WSA World Series title – the Banbridge-born star has won the prestigious Irish Open trophy five times, twice finishing as runner-up.

With more than 120 caps for Ireland, Perry has competed for her country in eight successive biennial World Team Championships and in February won a record 15th Irish National title.

“I have decided to retire from the World Tour and have decided that the Irish Open (from 21-25 April) will be my last World Tour event,” said Perry, the event’s top seed for the ninth time. “It is been an incredibly difficult decision to make but I had to be honest with myself and unfortunately I have noticed that I do not have the same extreme focus that I once had, or indeed, desire to compete.

“Having had such a successful career, I felt that I was no longer doing myself justice and felt the time was right to move on and find a new career. 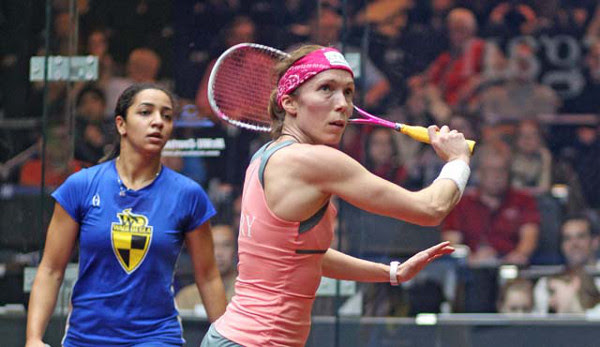 “I am so proud to have come from a small country like Northern Ireland and to have competed at such a high level on the world stage,” Perry (pictured above in action in the 2014 Tournament of Champions) continued. “Highlights for me have been reaching world number three; reaching the final of the British Open after beating world No.1 Nicol David in the quarter finals; reaching the semi-finals of the World Open; and winning the Australian Open.

“I still play and train to a very high level so I have every intention of continuing to compete for Ireland, at national level and leagues as I still love training and playing the game. I also hope to coach more and give back to the sport that has given me so much.

“A new challenge awaits and after retiring in June, I will travel to Malaysian Borneo to volunteer for the charity Raleigh International, a youth and sustainable development charity. I will work there for three months as a Project Manager for a diverse group of younger volunteers on various sustainable development projects within communities living in poverty.

“I look forward to travelling to Borneo but this time instead of playing squash in a foreign country, I will contribute to the country and hopefully enhance people’s lives!

“I have so many people to thank for their support during my career but I will save those for after the Irish Open so for the next two weeks all my focus will be on that event and I will hope to finish my World Tour career on a high at Fitzwilliam Lawn Tennis Club in Dublin where I have had so much success over the years including my 15 Irish National titles.”

Irish Squash president, Ed Dunne says “Madeline has been a great role model for squash players in Ireland and around the world playing a such a high level for so many years. We in Irish Squash are so proud of her and thank her for all that she has contributed to squash in Ireland. I want to wish her all the best in the next chapter of her life and we are delighted that she will continue to play squash at national level.”

WSA CEO Tommy Berden paid tribute to Perry: “It is fitting that Madeline plays her farewell professional event at the Fitzwilliam Club, a place where she has had many great results. She has been a great role model for all of her peers and we would like to congratulate her on an outstanding career. We wish her all the best in the future and hope that she will continue to give back to the sport of squash in another capacity.”

Despite retiring from the WSA Tour this month, Perry will have a busy month in May: In addition to fundraising for Raleigh International for her trip to Borneo, she will also play the European Team Championships (in Denmark, from 29 April to 2 May), the English Premier League semi-finals for Coolhurst London, the Italian League Finals, and the BSPA Finals at Roehampton.