Egypt have completed a clean sweep of the World Junior Squash Championship for the first time since 2013 with Rowan El Araby winning the women’s and Marwan Tarek the men’s.

El Araby, 16, was runner up in Poland last year after beating Hania El Hammamy in the semi-finals, but became a champion in Tauranga today with a dominant 3-0 win against the countrywoman El Hammamy, the top seed.

“I am so happy. I worked so hard for this title after coming second in Poland last year,” El Araby said. “It’s difficult playing another Egyptian but there are no friends on the court and I worked hard to stay calm.”

She was a picture of composure as she led in each game and held firm as El Hammamy tried to rally, but never really go her game going, El Araby winning 11-7, 11-9, 11-8.

“I didn’t expect it to be three-nil. All the matches I play against Hania are normally close. This is just amazing. I’m sorry, I don’t really have many words right now.”

Tarek, 17, was just as lost for words after his five game victory over Victor Crouin, bidding to become the first ever French winner.

None of the five games were in doubt, Tarek winning the first and third games with some comfort, Crouin taking the second and fourth in even more emphatic fashion After losing the first point in the decider Tarek reeled off eight points in a row before winning 11-2.

Tarek revealed he was feeling the effects of his semifinal win against top seed Youssef Ibrahim. “I wasn’t 100 percent ready. My body was weak but this is the world championships and you have to survive.”

It was the first time since 2013 that an Egyptian has won the men’s junior title while El Araby’s success is the seventh successive title for an Egyptian female.

Both top seeds crashed out in the men’s semi-finals as France’s Victor Crouin and Egypt’s Marwan Tarek won through to the final in Tauranga.

Crouin, the European Champion, played some of his best squash to oust Jordan’s second seed Mohammed Al Sarraj, taking the opening game and then controlling the final two after Al Sarraj had levelled.

Tarek took on compatriot and close friend Youssef Ibrahim, and after taking a close first game, raced through to a two-nil lead. Ibrahim fought back, taking the third and a decider lookd on the cards as he earned three game balls at 10-7 in the fourth.

As has been the case all tournament though, unforced errors proved to be Ibrahim’s undoing as Tarek took five points in a row to reach the final.

The women’s final will be an all-Egyptian affair – the seventh in a row – as top seeds Hania El Hammamy and Rowan El Araby – both just 16 years of age – won in straight games to set up a repeat of their semi-final in last year’s event in Poland.

Hammamy beat Satomi Watanabe, the Japanese threatening to extend the match with comebacks in the first and from 7-10 in the third, while El Araby capitalised on an 8-1 start to maintain control over Amina Yousry throughout the three games.

WHAT THEY SAID – quotes from the semis

A dramatic quarter-finals day of the WSF World Juniors in Tauranga saw both Egyptian top seeds survive five game battles as the seeded players prevailed in seven of the eight matches.

Men’s top seed Youssef Ibrahim looked to have put his nerve early performances behind him as he took a two-game lead over Andrew Douglas, but the American fought back to lead 9-7 in a tense decider before Ibrahim took the last three points to his, and the Egyptian camp’s delight.

He’ll meet compatriot Marwan Tarek after the 3/4 seed came from a game down to beat India’s Abhay Singh.

In the bottom half of the draw both Egyptians who made the quarter-final against the seedings were beaten in straight games – second seed Mohammed Alsarraj from Jordan beat Mostafa Assal to set up a semi-final with France’ European Champion Victor Crouin, who despatched unseeded Aly Hussain in the opening match of the day.

The women’s matches started with an all-Egyptian match, and a big seedeng upset, which saw 5/8 seed Amina Yousryovercome second seed Zeina Mickawy in three close games – gaining a measure of revenge for her epic loss in the British Juniors early in the year.

She faces another Egyptian opponent in the semis after 2016 finalist Rowan Elaraby prevailed in a see-saw five-setter against Malaysia’s Andrea Lee.

The top half of the draw witnessed two more five game thrillers as Japan’s Satomi Watanabe eventually denied 14-year-old American prodigy Marina Stefanoni, and top seed Hania El Hammamy had to come from two-one down to see off the challenge of Malasia’s Sivasangari Subramanian, racing through the fifth 11/1.

Day 3 – The quarter-finalists were decided today in Tauranga, with twelve matches on the Glass Court at QEYC and four on Devoy Court one, and there was also a full complement of plate matches.

Four of each for Egypt as
Stefanoni boosts US interest

While Egyptians continued to dominate the women’s draw, with four of their players going through as expected, the big upset came when USA’s Marina Stefanoni, a 9/16 seed, ousted 3/4 seed Nada Abbas in four games of quality and enthralling squash. The remaining seven top seeds all progressed, with only Egypt’s Amina Yousry dropping a game.

Egypt will provide a quarter of men’s quarter-finalists too – one in each of tomorrow’s matches – but two of those came through with upset wins – Auseeded Aly Hussain continued to impress as he beat India’s Adhitya Raghavan in five, while Mostafa Asalalso overcame a 5/8 seed as he beat Kyle Finch, leaving England with no quarter-final representatives.

The Irish players playing in the plate event played 2 Australians and 2 New Zealanders. Unfortunately there were no 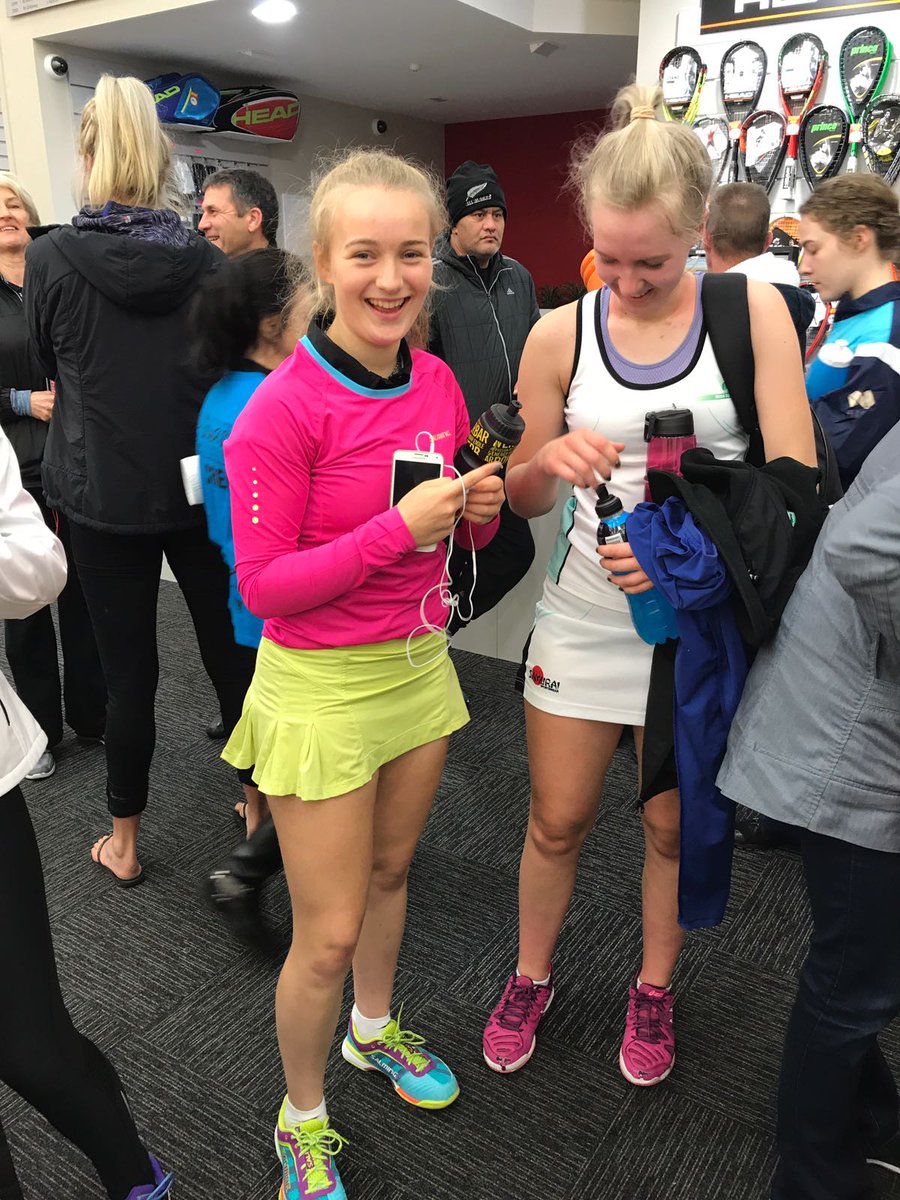 wins so they each have player their 3 matches and now await the team event whivh starts next Tuesday. For some video of today’s matches of the Irish players, go to – https://twitter.com/irishsquash?lang=en

Last match of the day was Lily Lloyd v Rhiarne Taiapa from the host country.

For results for the Irish players go

For all the results and the draw go HERE